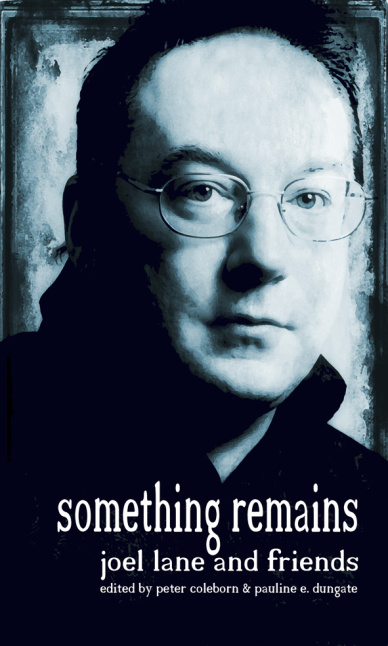 Last year, Peter Coleborn of the award-winning Alchemy Press contacted me about a project he was working on with Pauline E. Dungate that I couldn’t possibly have said no to: an anthology based on some of the unfinished work of the British writer Joel Lane. After Joel’s untimely death in 2013, his loved ones found that he had left a lot of fragments behind. Those of us working on the project were sent scans of the manuscript fragments to choose from, and I selected a fragment called “The Other Side.” What I had to work with were two handwritten pages, one partly notes and prose and the second all prose based on the notes of the previous. I used Joel’s second page of prose almost exactly as it appeared and built my own Lane-esque story around it.

It was an enormous honor to work on this and also an extremely moving experience. I had selected the fragment that spoke to me the most personally, and worked hard to get into a mindset that would produce a story that was truly a collaboration between Joel and me. As someone who had only a passing acquaintance with Joel personally (but who has loved his work since the 1990s), it was surprising how close I felt to him over the course of writing the story. I do not literally believe that I was visited by some spirit in the process of writing it, but I absolutely felt his presence and influence throughout. I was happy with the result–not something that I always feel on completing a story–and I hope Joel would be as well. Above all, I hope his friends and those who admired his work think I have done a decent job in acting as his collaborator.

Something Remains will launch at the British Fantasy Convention in September, and copies will be available there and through Alchemy Press. No one is making any money from this effort; all proceeds will be donated to Diabetes UK in memory of Joel.

I’m sharing the table of contents with a number of talented writers, many of them close friends of Joel’s:

You can read an interview with me at the F&SF site. I talk about my story in this month’s issue of F&SF, “Where the Summer Dwells,” as well as what I write in general, what I’m working on, etc.

I sold my apocalyptic fairy tale “Red at the End of the World” to Daily Science Fiction this week! I’m very pleased, as this is an odd little tale I love a lot and it’s not the type of thing I usually write. I tend to approach narrative in a traditional way; this story demanded to be written in a very different manner. I’m pleased the editors liked it enough to buy it and of course, I’ll link from this blog (and the “fiction” page) once it’s online.

“The Chance Walker,” a story by me published in The Third Alternative back in 2003, is up now at Transmission from Beyond as a podcast. Read by me too!

I still like this story and since it’s never been reprinted anywhere, I’m really pleased it’s available again. The story comes from a couple of places. I taught English for a few months in the Czech Republic in the mid-90s, and while in Prague one day, I picked up a book of paintings by a Czech artist named Jiří Mocek. (In the past, googling him online I’ve found little out there. This time I found some nudes, but those aren’t representative of the book I have; my book is full of work more like this.) There’s so much amazing art and literature from that part of the world that never makes it outside its borders. Years later, I was sitting in my Portland, Oregon apartment, trying to write, and feeling blocked, and I picked up Mocek’s book and started flipping through it. One of his paintings was called “The Chance Walker” in translation, and from that and some of his other weird urban landscapes, parts of this story grew.

The story is set in a town about an hour away from Prague, where D and I lived in one of the grim Communist-era panelaks. A lot of real experiences made it into the story–including the WW II bunkers–and of course, as is always the case with fiction, plenty of it is made up as well.

Prague doesn’t figure into the story, but writing this makes me think of wandering its snowy winter streets. It is — or was then, I don’t know how the continuous influx of tourism and foreign residents has changed it — a fairytale of a city, with strange winding lanes full of odd little shops in the Staré Město, or Old Town. I remember looking down from Prague Castle at a sea of red rooftops and thinking that the whole place felt magical. Part of that magic was that it had been hidden from those of us in the West for so long, and when the revolution came even that felt like something out of a story–a Velvet Revolution, led by playwrights and punks! The buildings there, long-neglected during the Communist era, were all being restored, and the architecture was astonishing. I know I am being too romantic about the place, and Prague in the mid-nineties was already feeling wrung out by a burgeoning expat population, especially Americans. As a student said to me once, “First we were occupied by the Germans, and then the Russians, and now the Americans.”

The country did indeed feel haunted by its past, most especially by ghosts of its turbulent twentieth century. And so I wrote a story about that, and some other things, too.