First! Brian Lillie asked me lots of great questions for his blog 31 Hath October.  Check out my answers (well, plus his questions) here!

Next! I wrote a chapter on “Finding Your Voice” in Writers on Writing, vol. 4, edited by Joe Mynhardt over at Crystal Lake Publishing. It’s an ebook available on Amazon and is out now.

And! If you are looking for some great horror stories to read, Adam Nevill offers up a list over at The Quietus, including my story “The Dying Season” from Aickman’s Heirs and lots of other great stuff.

This post is part of the Charles L. Grant blogathon as curated by Neil Snowdon. All posts for the blogathon are available at that link as they appear.

I can’t remember in which of two ways I first encountered Charles L. Grant: was it through his series of Shadows anthologies, or his short story “If Damon Comes”? It would have been at roughly the same time, sometime in my late teens, and both made deep impressions upon me. The short story I found in David Hartwell’s anthology The Dark Descent, a book whose influence on me cannot be overstated, and it absolutely terrified me. I remember I read it over and over again, perhaps in the hopes that would somehow diminish its power, only to find the opposite happening.

It was a frightening story, but what made it work was Grant’s technique: his elliptical approach to storytelling, what he did not include. There was also the mundane tragedy of the story at its core, that of a broken marriage, a broken family. Grant was a master of getting at the psychology of his characters and revealing sometimes-uncomfortable truths about human nature.

I have always been under the impression that it was Grant who coined the term “quiet horror” although as I write it now I wonder if I’m wrong, but it was a term often applied to his work. “If Damon Comes” is a masterpiece of quiet horror and demonstrates how devastating and scary such an approach can be.

And then there were the Shadows anthologies. I must have read all of them, some of them multiple times—along with Stuart Schiff’s Whispers series, in my mind the two are indelibly linked—not even realizing that I was giving myself a foundational course in then-contemporary horror fiction, just reading them because I loved them. They were like a Who’s Who of 1970s and 1980s horror. Ramsey Campbell, Dennis Etchison, Steve Rasnic Tem, Manly Wade Wellman, Lisa Tuttle, Joe R. Lansdale, Tanith Lee, and Melanie Tem were just a few of its influential alumni.

I met Charles L. Grant once. It was either at the very end of the 1990s or the beginning of the 2000s, at a World Horror or World Fantasy Con. I waited in line to have him sign a book for me—Jackals, not one of his best novels, and published as the commercial horror boom was waning—but I’d been reading it on the way to the convention. I was in awe of him—I was in awe of anyone who was a writer—still kind of star struck with the idea that I could walk up to these people that I’d read and admired and, well, technically make conversation although in my case it generally just amounted to me approaching them with a book held out before me like some kind of shield and shyly mumbling something about how much I liked their work before slinking away. Anyway, what I remember about meeting him was that he was gruff and funny. I handed the book to him babbling something about how I hadn’t finished it yet but I was really enjoying it and he scrawled in it “Lynda, Finish the damn book!”

I love the vein of “quiet horror” in which Grant wrote. His manipulation of language and the slow burn of his storytelling isn’t for every taste but rewards those who have the patience for it. And this is the perfect time to seek him out, for in my memory of his work, in Charlie Grant Land, it is always autumn.

I’ve had the pleasure of getting sneak previews of a couple of things coming out soon, one a short novel and one a novella.

David Longhorn is the editor of the well-regarded Supernatural Tales magazine [disclaimer: yes, I have had a few stories published there] and his debut novel proves that he’s as adept at storytelling as he is at selecting stories. Sentinels is the first of a trilogy and has the same old-fashioned feel to it as a Jonathan Aycliffe novel (and here I mean “old-fashioned” as a compliment). Fast-paced and fun, Sentinels, set in England in 1940, mixes horror with international intrigue (Nazis! Spies!) and a dash of M.R. James (and maybe some Tombs of the Blind Dead, although that my just be my own undying fondness for that film coming through that made me picture the “Raggedy Men” as those scary undead Templars). I can’t wait for the next installment. This is available on Amazon on June 17, and you should check it out–you can preorder it for a mere 99 cents as an ebook, and it’s also available as a paperback. (Also available on Amazon UK.)

If you aren’t already familiar with her, Shirley Jackson Award-nominated S.P. Miskowski writes stories about very bad, very real women. In other words, not women who are, say, bad but sexy. Or “women that you love to hate.” Miskowski’s characters are complex and terrifying and they probably will remind you of at least one person that you know or have known. Or maybe that’s just me.

Muscadines is a very dark novella that is coming soon from Dunhams Manor Press.  Here’s what I had to say about it elsewhere: “Narrated in prose as languid and deceptively dreamlike as a Georgia summer afternoon, S.P. Miskowski’s Muscadines feels like a fairy tale recast as a Southern Gothic—a fairy tale of the old, savage, unsanitized-for-modern-children’s-consumption variety. Nobody does very bad women like Miskowski, and this deeply disturbing story further establishes her as a master at exploring the psychological terrain of the kind of women who aren’t supposed to exist.”

Last year, writer and all-around good guy Mark West curated a blog called King For A Year in which writers and readers went back and reread (or in some cases, read for the first time) a book by Stephen King and wrote about the experience. It was great fun for all involved, seeing what was up each week, and I went back to Carrie, a book I hadn’t read since I was a teenager. So, needless to say, when Mark got in touch with me proposing a much smaller project, I leapt at the chance to join in.

This would be a single blog post: The Brit Horror Mixtape. Mark asked each of us to contribute a few words about a favorite (maybe I should make that favourite) British short horror story.

Just a single story! Harder than it looks! Would I choose something by Robert Aickman, Daphne Du Maurier, Arthur Machen, Ramsey Campbell, Lisa Tuttle? What about Oliver Onions’s “The Beckoning Fair One”? I narrowed the field down by deciding I wanted to choose something by a writer who was still living, then I eliminated writers whose body of work was more influential for me than any single short story.

The choice then was pretty clear. Not that the writer I chose isn’t one who has other work that has also affected me deeply, but if you asked me to name single stories (I’m not going to pick a number, because numbers are arbitrary and silly) that had profoundly affected me as a writer both stylistically and thematically but also changed, in some small way, the way that I see the world, this one would be one of the top ones on the list.

There are lots of other great choices on there as well–I was glad to see both Arthur Machen’s “The White People” and Daphne Du Maurier’s “The Birds” on there as well as double honors for Angela Carter along with two classic chillers, M.R. James’s “The Mezzotint” and W.W. Jacobs’s “The Monkey’s Paw.” It’s actually a damn good list, a wonderful starting point for exploring British horror fiction, and you should check it out.

I’ve been reading Steve Rasnic Tem for two decades, and so when I learned he would write the introduction to my first short story collection, The Moon Will Look Strange, I was overjoyed. I was equally pleased to have the opportunity to interview him in connection with his latest collection from Swan River Press, Here with the Shadows, which is available now for pre-order and shipping next month. I got the opportunity to ask him about specific stories and themes in the book, his own approach to writing such powerful and moving fiction, and his personal history among other things. His responses were terrific, and very enlightening. You can find the interview here at the Swan River Press website, and while you’re there, take a look around at some of the other books and chapbooks for sale. 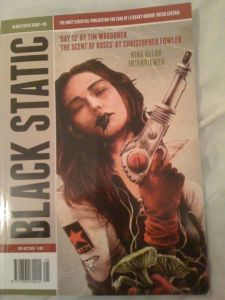 Black Static #36 is out! In addition to my column, “Blood Pudding,” there are stories by Jacob A. Boyd, Stephen Bacon, Tim Waggoner, Christopher Fowler, V.H. Leslie, and Ray Cluley plus Stephen Volk‘s regular column “Coffinmaker Blues,” reviews by Tony Lee and Peter Tennant, an interview with the incomparable Nina Allan and the usual assortment of exceptional artwork.

Black Static is one of the premiere print magazines of the horror field, so if you love horror fiction and want to keep up with some of the best short fiction work being done in the genre, I highly recommend a subscription. You can also get it on Kindle in the US

and in the UK.

Oh, and if you can’t get enough of my writing, you can still buy my book.

My story “The Wife’s Lament” is available now in the magazine Supernatural Tales #24, a fine journal edited by David Longhorn. When I first read the poem from which the story borrows its name and themes and imagery, I was fascinated by its weirdness and ambiguity and wanted to write a story about it for a long time before the right tale finally found me. Years ago, I translated the poem myself from the Old English (roughly), and bits of that translation appear in the story. Here is one translation (not mine), but the thing about this poem is that modern English can’t do it justice, and what you don’t get from reading anyone’s translation is the confusion in the poem. It is really not clear, in the Old English, whether there is one man or two and who has “buried” her and whether that is literal or figurative–is this the lament of a dead woman, or is she still alive? What exactly has happened? The poem, in its original language, raises more questions than it answers. This might not be the case if we were native speakers of Old English; some of the confusion is over issues of syntax and word choice, and we don’t have any early medieval Anglo Saxons hanging around that we can check with. Go here to hear a reading of the poem in the original Old English.

My version of “The Wife’s Lament” is set in modern times. I really love this story; I hope you do too.

You can also read fiction from Stephen Goldsmith, Jane Jakeman, John Llewellyn Probert, Sean Logan, Michael J. Abolafia, and Sam Dawson (who also illustrated the cover for the ebook) as well as an assortment of reviews. The magazine is available in both print and ebook formats.